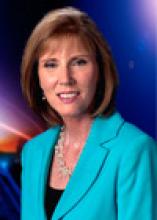 25 years ago, a guy I'd just met asked me to accompany him to Opening Day. While I didn't know him very well, who can pass on that ticket? I asked him to pick me up at the station. We were running late, and I convinced him the parking place in front of the old Red Cross building was "just fine… it's Opening Day, police have better things to do than tow this car." The weather was beautiful, the game was good, and the company was fun. We walked back to his car, which was still there, but it wore a big ol' parking ticket on the windshield. I offered to pay the fine, but he graciously declined and even asked me out on another date. Almost exactly a year later we were married, and now are happily raising three kids together. So for me, Opening Day marks a great deal more than just the beginning of the baseball season. It marks the beginning of my life with Mike.

In the years since, I've helped cover the parade, the celebrations surrounding good seasons, the building of a new stadium and the implosion of the old one… my favorite memory remains that Opening Day game with the guy who turned out to be the man of my dreams.

Kit is a graduate of Washington State University where she earned a BA in Communications and a Minor in History. While in college, Kit attended the University of London for one semester in 1977.

Kit's interest in reporting began when she volunteered as an announcer at WSU's campus radio stations, KUGR and KWSU. Then in 1978, she worked as a videotape librarian at KIRO-TV in Seattle, WA. After that, Kit was hired as a reporter/producer/anchor by KHQ-TV in Spokane, WA. It was here that she gained most of her on-air experience. Kit then relocated to Cincinnati.

Kit spends her spare time with her husband, Mike; sons, Jake and Gus; and daughter, Maddy. She also enjoys running, reading, and keeping up with her children.