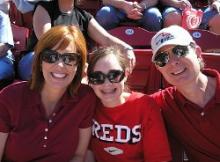 I grew up about an hour and a half north of Cincinnati in Sidney, Ohio, so I was raised as a Reds fan and remember fondly the days of the Big Red Machine. Johnny Bench and Pete Rose were heroes to me, and I wore out a T-shirt with Johnny’s number 5.

When I was in school, I won tickets to Reds games several times by making the honor roll, and it was always a big deal to drive down to Cincinnati, watch my Reds play at Riverfront Stadium, and stay up late.

Years later, when I started working at Fox 19, imagine my elation at being assigned live broadcasts from Riverfront and then Great American Ballpark on Opening Day. I had never been in Cincinnati for Opening Day, and I quickly learned what a true holiday it is here in the Queen City. Working on Opening Day has allowed me to meet some of the Reds icons of whom I was a fan, people like Sparky Anderson, George Foster, Tom Browning, and of course, Joe Nuxhall. I’ll never forget something the Ole Left Hander always said in our Opening Day interviews. Joe said he loved the optimism of Opening Day, that every year he looked forward to a winning season, because this is the day we (and the Reds) have a clean slate.

I’ve also had the pleasure of taking my daughter, Katie, to many Opening Day games, and I will do the same with my son Eric as he gets older. The memories of carrying on the tradition of being a Reds fan with my children is something I will always treasure.

Co-anchor of the Fox 19 Morning News on WXIX-TV

Sheila Gray co-anchors the Fox 19 Morning News on WXIX-TV. She and Rob Williams have been together since 1999, making them the longest running morning anchor team in Cincinnati.

She won awards for her reporting in Charleston, West Virginia, where she was the first woman to be named anchor of the 6:00 News at WSAZ-TV.

She enjoys serving on the board of the Make A Wish Foundation.

Sheila lives in Northern Kentucky with her husband Ric and their children, Katie and Eric.