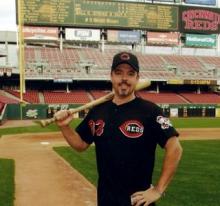 There are two seasons in Cincinnati: Winter and baseball.

My favorite moment is walking into the park on what is usually a cold, windy and often rainy Monday in early April and literally witnessing the seasons change. Catching that first glimpse of green outfield turf, hearing the pop of the ball in a glove and smelling the hot dogs grilling instantly erases what seems like six months of gray skies, brown grass and salt stains.

Not only does 700WLW’s Scott Sloan not know what those terms mean, he’s proud to be the only true voice of the Reds fan enjoying baseball the way it used to be before becoming overrun with amateur statisticians and mind-numbing analysis. Just like the guys doing the game on 700WLW, he makes following the team fun.

One of his fondest memories are road trips with his father to see games at several old parks, including (of course) Riverfront stadium where figures like Bench, Perez and Morgan loomed larger than life. To him, baseball is the first glimpse of a perfectly manicured green outfield set against the grey skies of early April. It’s the sound of the soft pop of a fastball striking leather. It’s the feel of a cold beer in one hand and nuts in the other.

Extra Innings with Scott Sloan captures the sensation of sitting in the stands and watching the Reds while overhearing fans complaining about overpaid athletes, $11 nachos and the comparison of every player on the roster to Pete Rose.

“Scott Sloan was the guy who turned me on to the whole look of wearing a watch on top of a sweatband.” -Dusty Baker

“If we would have had him in the clubhouse back then, we wouldn’t have won any World Series titles.” -Sparky Anderson

“I didn’t raise you like this. Why are you making up quotes from famous athletes? Your father’s not like this. I’m worried sick.” -Sloan’s Mom