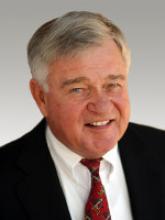 My favorite Opening Day memory was seeing Hank Aaron hit his 714th home run on April 4, 1974, to tie Babe Ruth’s all time home run record. The day was filled with great anticipation, and I was in the stands with co-workers and customers. An associate was sent up to the concession stands for drinks, and he came back to hear that Hank had hit the historic home run. He asked us never to tell his family he had missed the hit. We proceeded to tell his wife almost immediately after the game, and he has never lived it down!

On Nov. 2, 2005, the Cincinnati Reds announced that the controlling interest in the club would be acquired by a group of Cincinnatians led by Robert H. Castellini, Chairman of Castellini Company.

Other members of the group acquiring the controlling interest include Thomas L. Williams and W. Joseph Williams, Jr., President and Chairman, respectively, of Cincinnati based North American Properties.

The sale of the club was completed on Jan. 19, 2006, and Mr. Castellini assumed control of the Club as its Chief Executive Officer.

Mr. Castellini has been involved in Major League Baseball for over 30 years. His involvement included a minor interest in the Cincinnati Reds as part of the Williams family ownership until that interest was sold in 1984. He became a partner in the Texas Rangers in 1989 and the Baltimore Orioles in 1993. From 1995 until 2006 Mr. Castellini was an investor in the St. Louis Cardinals. The interest in the Cardinals were sold as a condition of his acquisition of the Cincinnati Reds.

Mr. Castellini has been the Chairman of Castellini Group of Companies since 1992, following tenures as Executive Vice President from 1967–1970 and President from 1970–1992. The Castellini Company businesses include perishable distribution, food processing, public warehousing, transportation logistics and leasing.

In 1963 he graduated from Georgetown University with a degree in economics and after 2 years as an officer in the U.S. Army he received his MBA from Wharton Graduate School in 1967.

Bob is married to Susie Castellini and they have four children. In November of 2010, they welcomed another grandchild for a total of 12 grandchildren.