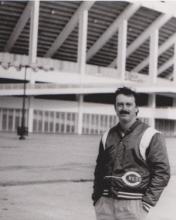 My favorite Opening Day memory... The best job I ever had, besides being an author of baseball books, was working for Comair at the Greater Cincinnati airport as a gate agent. The specialness of Opening Day was evinced even in that milieu. During a conversation between two Delta pilots one day I heard one of them describe how he’d been awakened one chilly morning at his downtown hotel by some gawd-awful racket. "I heard loud music playing right outside my window, and when I parted the curtains in the room and looked down at the street I saw a big parade going by … with floats and marching bands and fire trucks and celebrities riding in convertibles … and it went on for blocks and blocks."

"What was all the fuss about?" asked the other fly boy.

"They were celebrating the first game of the baseball season," said the first pilot.

Indeed they do was what I thought with an amused nod of my head.

Having lived through a mere 35 or so Opening Days in Cincinnati, I realize I’m a Redleg-come-lately compared to real Opening Day veterans, but I do also understand why the day is so revered. It all has to do with the pride Cincinnatians take in the Reds history of having accomplished so many "firsts" in baseball, beginning with the honor of being baseball's first professional team; and … with the natives' equally fervent love of tradition. Opening Day and the Findlay Market Opening Day Parade are civic treasures which are handed down from one generation to the next, and every year that goes by only adds to the luster of the beloved heritage. There’s one more thing too … the hopeful feeling of renewal that blows like a refreshing breeze throughout the city on O.D. No matter how cold and dreary the previous months have been, no matter how bored we have been with the empty culture and the sophomoric offerings from Hollywood that are the norm now, no matter how much our favorite teams in other sports have disappointed us, and despite the failure of our politicians to make our lives or the country better … we all feel that life is worth living again when we know that the Reds are back in town ready to begin another blissfully lengthy baseball season.

Opening Day in Cincinnati never gets old; only Cincinnatians do. Boorish New York Yankees fans, who consider anything less than another World Championship to be a cosmic catastrophe, must regard with utter disdain the esteem in which Cincinnatians hold this single, inaugural game which never determines anything; but I’m not sure many Reds fans would swap baseball traditions with the denizens of Gotham City. Simply put, that's how special O.D. in this town is.

Founder and Editor-in-Chief of Spitball: The Literary Baseball Magazine

Mike Shannon is also the author of 16 baseball books. His latest book, HUTCH, is a graphic novel about the 1961 NL pennant-winning Cincinnati Reds and their manager, Fred Hutchinson, who lost a courageous battle against cancer in 1964. For more information on Mike’s books, please visit his author’s page on Amazon. For more information about Spitball Magazine, please visit SpitballMag.com