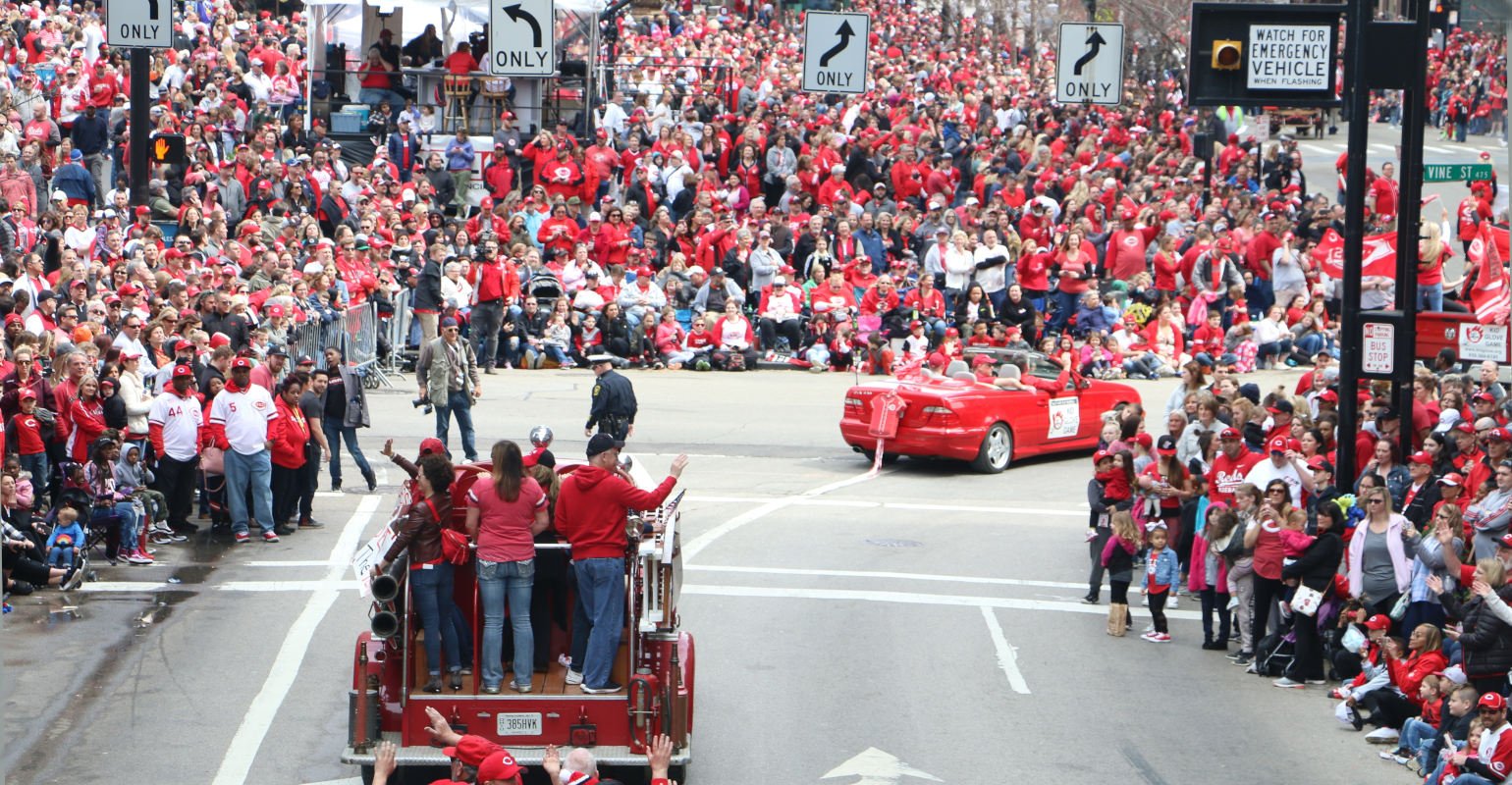 Findlay Market Opening Day Parade does not accept every applicant and reserves the right to accept or reject any Parade unit application. Parade participants/units must keep pace with the preceding unit. No stopping to perform or give interviews is allowed. If a stoppage to perform or give interviews (or any other non-emergency) occurs resulting in a gap in the parade, your unit may be removed from the parade and your unit will be banned from future Findlay Market Opening Day Parades.

Opening Day 2023 is presumed to be Thursday, March 30th.  The application process starts at the beginning of October for Schools and Civic Groups (Fire/Police/Military).  Around Thanksgiving we open to the Major Supporters and Supporters for early registration.  During the first week in January, we will open for general registration for a few weeks.  If this is your first time to request a place in the parade, you need to be sure that your entry is better than the lesser quality entries that were in the previous parade.  This is a somewhat competitive process.   We do this to ensure the quality of the parade.  We will go with a known unit over a new unit if they are of similar quality.

What are we looking for: Baseball and Findlay Market are the main themes above all.  Having a parade worthy, family friendly unit with a noteworthy former Reds player will basically guarantee entry.  Another top priority is a professionally made float (The main supplier of floats for the parade is: http://www.creativefloats.com/).  The parade is also about the people of the greater Cincinnati region.  Note in the 2022 parade we had Olympians from the region, former Bengals players from the 1981 and 1988 Superbowls, Cincinnati musical personalities, a WWII War Hero, and many others (see: https://www.findlaymarketparade.com/2022-Parade-Photos).  We are always looking for fun and exciting units, such as: Wapakoneta Breakfast Optimist Club, Dance Flash Fusion & Cincinnati Circus, to name a few.  Always looking for good horse units and antique firetrucks (pretty much maxed out on modern firetrucks).  See photos of our units through the years: https://www.findlaymarketparade.com/parade-photos

What we are NOT looking for: First, think to yourself before requesting entry: Would you want to see a unit like yours if you went to a parade? No one cares to see a business vehicle with a fancy wrap promoting that business, they can see that every day.  No one wants to see a politician followed by a bunch of people with shirts on with that person's name and please no unseated politicians (if we took everyone running for office, we would have no room for anyone else).  No one comes to a parade to see your political message.  We also do not want family inappropriate units.  Remember this is a family friendly parade celebrating baseball, Findlay Market, and the people of the Cincinnati Metro Region.

Schools, Civic Groups (Fire/Police/Military) and Sponsors: School applications are now Closed. The application process has started for Fire, Police, Military and Sponsors only. Sponsors will have till the 1st of the year.  Those that do not respond or respond late will have less of chance of being accepted.  If your contact has left, it is your responsibility to inform us of that change.

Currently we have 40+ school units registered. Up until now, we have taken all schools that entered, this will probably not be the case anymore, especially with the reduction of total units from 180+ to max 150. We will show a preference to those schools that have been with the parade for 20+ years.  We will then consider past performances in the parade. If you have not been in the parade before, you may want to include awards/accolades your unit has received and/or a link to a recent performance given.  We have never had a Marching Band from West Virginia in the parade, the western part of that state in considered the edge of Reds territory.  So a Marching Band from the Huntington area would be great to have.

Donations: The parade has lots of expenses: Insurance, Grand Marshal/VIP travel (we fly in and put up VIPs who come in from out of state/country), Web Expenses, Printing, as well as many other items.  This is not a money making venture, Committee Members are not paid, but are volunteers.  Without supporters, we obviously cannot have much of a parade.  Be aware, just being a Major Supporter, does not mean automatic entry.  It cost us an average of $300 per unit in the parade. With Major Supporters/Supporters helping to cover the extra expenses other than just their own unit, we offer the following incentives:

General entries: Entries are not required to make a donation, but if you are a business/politician/organization (including non-profits) that has the means to cover the expense of having your unit in the parade (average of $300 per unit), it is strongly suggested.  The cost of having you in the parade should not be shouldered by others if you have the means.