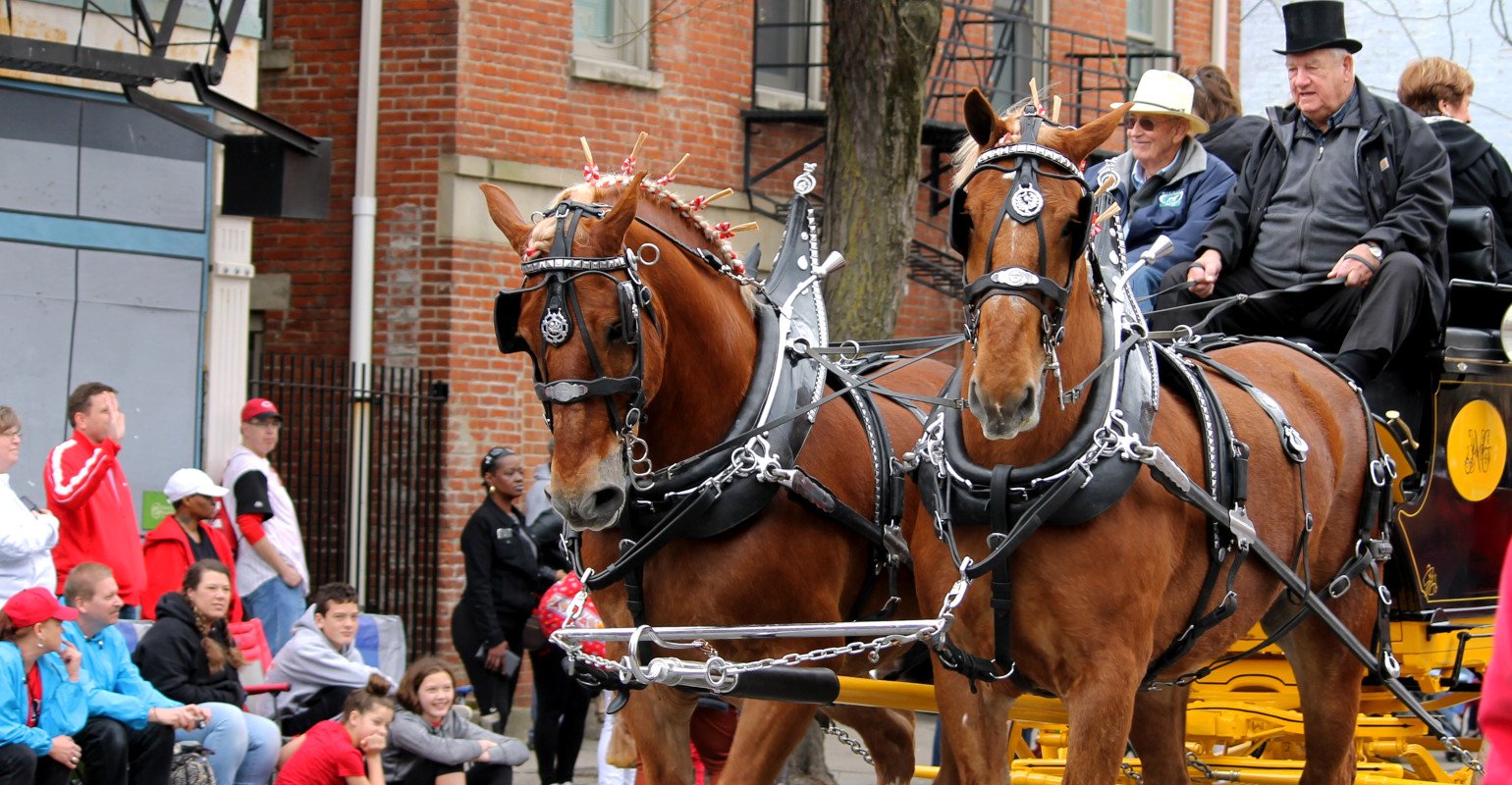 Raymond “Ray” Wegman, of Cincinnati, Ohio passed away on January 21, 2021, he was 88 years old.    Ray was a huge supporter of the Opening Day Parade for longer than most of us have been associated with the Parade.  Ray has led the Parade with his legendary Tally-Ho Wagon since the early 1980s and never missed a Opening Day Parade since his first appearance. At that time, the parade lined up on Race Street and didn’t need more space than Race Street for the entire line up area.  The Wegman Tally-Ho Wagon has been recognized as participating in the very first Findlay Market Opening Day parade in 1920.

Ray was passionate about horses and that passion carried over to the Opening Day Parade.  Any parade in the country would be lucky to have Ray’s Champion Belgium Horses and his equestrian attention to detail and professionalism.  The Opening Day Parade has one of the best complements of horses of any parade in the country and much of this can be associated with what was Ray’s love of horses and his connections in the Draft Horse industry.

Ray hosted the Budweiser Clydesdale Hitch at his farm when they appeared in the Opening Day Parade.   Along with that, he hosted the Findlay Market After-Parade Cookout to celebrate this uniquely Cincinnati Holiday and all of the hard work of the volunteers and parade enthusiasts that make the parade possible.  Ray loved showing and talking horses to all of those who attended, with annual appearances from horse enthusiasts from around the country to show and talk horses based upon Ray’s reputation for making Cincinnati’s Opening Day a good time and a showcase for horses.  Although overbooked on Opening Day as the Red’s Owner, Marge Schott was a regular attendee back in the day.

As much as Ray loved people, he loved his horses more. Ray was a member of the Gymkannah Horse Club, The Harvest Home Show Committee (where he also was known for parading and showing his Belgian Horses), The now-defunct Harvest Home Saddle Club, and The Ohio Belgian Breeders Association.   Ray was inducted into the Ohio State Fair Hall of Fame in 1999.   From 1969-1999 Ray entered 171 hitch classes at the Ohio State Fair, taking first or second 73% of the time.   Ray had an extensive collection of wagons and buggies, many of them he has restored, including the “Gamble Wagon” shown below in the 2015 Opening Day Parade. From his first horse Duke, to his current six horse hitch, Ray has come a long way.

He, like his horses, was a gentle giant.   He was charismatic, colorful, exuberant, and  had a passion for his friends, both two and four legged.  Ray never walked away from a friend or any horse in need.  Ray was pre-deceased in 2018 by his wife Ruth who also loved Opening Day and was Ray’s lifelong partner.  Our sincere condolences to his daughters Beverly and Connie (Jack), sons Doug and Mark (Annie); Grandchildren Katie and Thomas. They have huge shoes to fill to carry on his legacy.

May he rest in peace.   -- The Findlay Market Parade Committee